The fascinating game of lasertag which originated from the US and Japan now finally sets foot in Germany.

The classical version of cops and robbers is combined with a futuristic feature and innovative improvements and motivates young and old to get active.

Lasertag is a physical workout in which your reaction ability, coordination, team spirit and sportsmanship will be trained. A pleasant and exciting change to watching TV and playing computer games which take place while sitting will be provided.

The main objective in Lasertag is to obtain as much points as possible. Moreover, the atmospheric arena provides through its maze-like structure many possibilities to achieve the main objective. This is further supported through fog-, light- and sound-effects.

Players either play in teams or alone against each other. Furthermore, each team is given a colour. Up to 14 people can play at the same time. The player gets a phaserpackage containing a phaser and a vest with sensors.

The phasers release an electric coded infraredimpulse which reacts with certain sensors like those on the vests. After a couple of “markings” the shields power is reduced to zero. If  that’s the case the marked players phaserpackage shuts down for a couple of seconds and the player responsible for this earns points. After the package reboots the player resumes the game. The game is very dynamic since the reboot-time takes only a few seconds.

Beyond that, there are also interactive components such as energy gates, base stations or targets (upgrades) with sensors. These components allow for a variety of games. 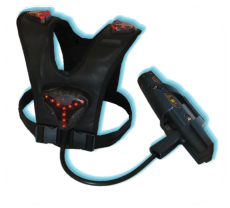